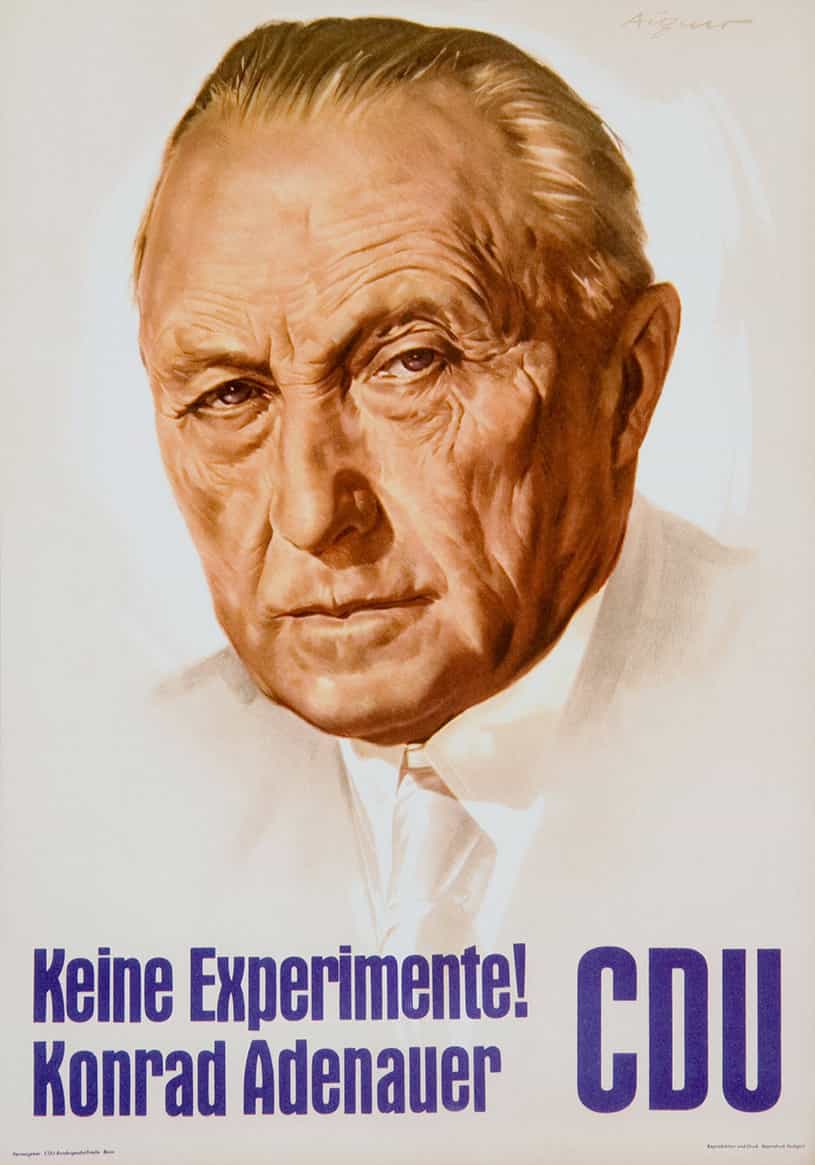 Angela Merkel won most votes on September 24, but her certainty of leading the next government with only 33% of the vote, a fall of 8.6%, is a sad commentary on proportional representation voting systems. Calls last year for her to be appointed “the savior of Europe” or “the leader of the free world” now seem laughably premature. In reality, Merkel represents the worst of today’s globalist-leftist tradition, with all the economy- and society- destroying traits that infest it. Konrad Adenauer, Germany’s great post-war Chancellor and founder of the Christian Democrat party she leads, would despise her.

Adenauer’s central objection to Merkel could be summed up in his 1957 re-election slogan: “Keine experimente!” – No experiments! Merkel’s ideologically-driven, socially and economically insane decision to open Germany’s doors to the riff-raff of the world was a classic example of the kind of woolly-minded experimentation that Adenauer detested.

Adenauer won the only absolute majority in Germany’s post-war history at that 1957 election. Given that it took place only twelve years after the fall of Nazism, the German electorate’s mood doubtless chimed very well with Adenauer’s deeply conservative slogan. Even so, the slogan also reflected a deep-seated attitude within German life that still exists. It must also be remembered that much of the German electorate in 2017, whose average age was 53, was itself little more removed from four decades of tyranny in the former East Germany than was the 1957 electorate from wartime.

Adenauer would have been deeply suspicious of Merkel’s origins, for two reasons. First, as a product of the relatively liberal and Catholic Rhineland, he disliked Prussians, deeply resenting their domination of Wilhelmine Germany and at one point seeking to make the Rhineland an autonomous state. Second, as the son of an officer who went into the state law service, Adenauer was no entrepreneur. He would nevertheless as a strong anti-Marxist have been deeply suspicious of a woman brought up in a hard-line Communist country until her mid-30s, whose father had voluntarily moved there from the freedom of Hamburg when she was an infant. He would also have looked askance at her membership of the secretariat of the Communist party youth organization.

Economically, Adenauer was not wholly an Adam Smith free-market capitalist. He believed in a “social market economy” as implemented by his finance minister Ludwig Erhard, while also being firmly committed to a balanced budget and small government. In this respect, therefore, he would be a supporter at least of Merkel’s finance minister Wolfgang Schäuble, who has kept Germany’s budget close to balance in a period when almost all other countries worldwide are running large deficits. He would be less impressed with Germany’s public spending level, 44.3% of GDP – he had succeeded in reducing it to 35% of GDP in 1960 — but he would accept the excuse that other intermediate figures and not Merkel herself were responsible for the increase since his time.

On monetary policy, Adenauer would regard Merkel as a disgrace, and would not accept the excuse that the ECB controls monetary policy and is not directly under the control of Merkel or Germany. Adenauer himself was directly responsible for the establishment of the Deutsche Bundesbank in 1958. He was also responsible for its correcting the Fed charter’s mistake and reversing its structure, so that the Bundesbank has only one office but is controlled by the German lander and not by the central state.

Under the Bundesbank structure, the incentives for a sound anti-inflationary monetary policy, with solidly positive real interest rates, are much stronger than in the United States. Indeed, the Bundesbank’s track record while it ran an independent monetary policy from 1958-1999 was much better than that of the Fed, and the Deutschemark was the world’s soundest currency when it was absorbed into the euro in 1999.

Adenauer would be appalled at Helmut Kohl’s decision to relinquish control of German monetary policy to an institution that since 2002 has been controlled by French and Italian central bankers. He would be even more appalled at the ECB’s sloppiness towards Greece since 2010, and its infinitely foolish monetary policies of the last few years, running negative real interest rates and piling up immense mountains of dodgy southern European government paper in its vaults.

On social and foreign policy, Adenauer was far to the right of Merkel. He was a strong supporter of the traditional family and of Catholic social teaching, and of a strong religious presence in German life, all of which Merkel has abandoned. On foreign policy, he was strongly pro-American and pro-Israel, while regarding the proto-EU as a desirable goal, albeit one that should include the free-market Britain to balance the dirigiste France and Italy. He would however have regarded as laughable the idea of a Luxembourger like Jean-Claude Juncker setting most policy for the whole of Europe – the “ever closer union” ideal for Adenauer had clear limits. On immigration, Adenauer held the traditional German view that ethnic origin should be the controlling principle, so that ethnic Germans in Kazakhstan were part of the German community whereas Turkish gastarbeiter were not.

By no means all the Adenauerist believers are in today’s CDU – how could they be, when it received only 33% of the vote in 2017 compared to Adenauer’s 1957 triumph of over 50%? Some, the more committed free market liberals, have migrated to the FDP, the free-market-oriented traditional coalition partner of the CDU/CSU governments. Others, more traditionally minded in social and immigration policy or less aggressively secular, have migrated to the new Alternative fűr Deutschland party. The FDP and the AfD both made big gains on September 24, with the AfD finishing third with 12.6% of the vote and 94 Bundestag seats and the FDP finishing fourth with 10.7% and 80 seats.

As in most multi-party systems, the real process of government formation is done behind closed doors, with little input from the electorate, who might as well not have bothered to vote. Merkel, currently in control of this murky anti-democratic process, now wants to form a “Jamaica” coalition with the FDP and the Green party, which finished sixth with 8.4% of the vote and 67 seats. She proposes this coalition as the only acceptable combination that secures a Bundestag majority (since the Social Democrats, her previous coalition partner, wishes to be in opposition.) Thereby she perpetuates her own power – no other CDU/CSU leader could work with the far-left anti-capitalist Greens. Such a coalition would be extremely unstable, as the FDP and the Greens have diametrically opposite views on economic policy. Because of the Green participation, it would also drag German policy far to the left, in direct contravention of the clear wishes of the majority German electorate.

There is a much better coalition available, which would combine the true parties of the Adenauer inheritance: social conservatives, foreign policy conservatives and “wirtschaftswunder” free marketers. Such a coalition would ditch Merkel and form a coalition between the CDU/CSU, the AfD and the FDP. Such a coalition, which could be led by the outgoing CDU finance minister Wolfgang Schäuble, the CSU leader Horst Seehofer or the FDP leader Christian Lindner, would command 420 of the 709 seats in the Bundestag, a solid majority larger then Merkel’s “Jamaica” coalition, which would have 393 seats.

Konrad Adenauer was no Nazi, but nor are the AfD; there is every evidence that, even while differing from them in some respects, he would welcome today’s AfD into any coalition government he was forming.

The proposed Koalition Konrad Adenauer would have a clear center-right policy in all areas. It would be moderately Euro-skeptic, reflecting the views of the FDP and to some extent the AfD. It would thus reject Emmanuel Macron’s attempts to increase the power of the EU bureaucracy, as well as the endless bailouts of EU weak sisters like Greece and Cyprus. It would be clearly committed to the free market, unlike the “Jamaica” coalition. It would be moderately restrictive on immigration, softening the hard-line stance of the AfD by the more liberal views of the CDU-CSU and the FDP. On social policy, it would be fairly traditional, to the right of the current CDU-CSU leadership, reflecting the majority views of the German people, which as in most countries are more socially conservative than the elite. On foreign policy, it would reflect the AfD friendship towards Donald Trump’s America, rather than Merkel’s instinctive hostility to it.

In short, an Adenauerist coalition would be a thoroughly good government, unlike the thoroughly lousy government Merkel’s “Jamaica” efforts will produce. It would also have more popular support than Merkel’s feeble internally conflicted “Jamaica” mess. To achieve it, Merkel must be forcibly removed, and the artificial barriers to representation of the German electorate’s wishes, notably other parties’ refusal to work with the AfD, must be swept into the dustbin of history where they belong.

Konrad Adenauer would expect no less.