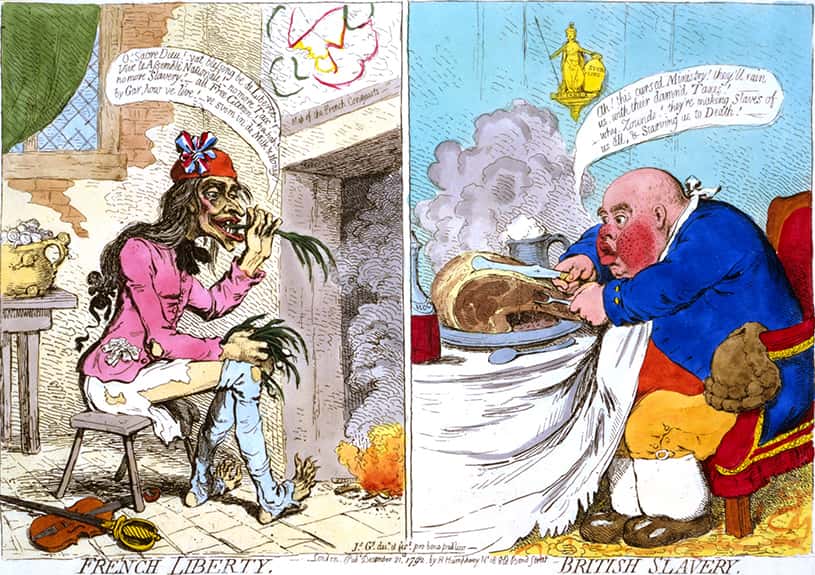 We have heard a great deal about excessive inequality in the United States, which has among other things been used to justify the recent rioting. Historical comparisons however show that inequality is not especially high by the standards of the past, though it has certainly risen over the last thirty years. Yet the solution to inequality lies not in more regulation, higher taxes and socialism, but simply in less rubbishy economic policy.

U.S. inequality today measured by the Gini coefficient, is a littler lower than Britain’s in 1825, in the early stages of the Industrial Revolution. To those new to the subject, this may seem like a severe accusation. Early industrial Britain has typically been painted as a cesspit of misery and squalor, with only a few very rich at the top. This is not accurate. The squalor was there, largely because 1825 Britain was by today’s standards an extremely poor country. Yet by the standards of the time, with the exception of a few poor souls who had been left behind by mechanization – hand-loom weavers and the like – who were unquestionably being immiserated if they did not move to find new work, working-class living standards were higher than for any previous society. Even the legendary “Merrie England” of around 1490, when the Black Death had reduced the population so far that the underpopulated remainder could demand high wages, did not have quite such high living standards for the mass of the working class.

The secret is that the rich of 1825 were not by today’s standards very rich. Yes, Jane Austen’s Mr. Darcy, with his £10,000 per annum had a magnificent house and lots of servants, but his plumbing, transportation and healthcare were diabolical by modern standards. The richest individual in 1825 Britain was probably the Marquess of Stafford, the future 1st Duke of Sutherland, who by dispossessing Scottish crofters and replacing them by sheep had acquired an income of about £100,000 per annum. Capitalize that at even 2.5%, below the interest rate on any security of the day, and you give him a net worth of at most £4 million. Gross that up by the change in the gold price between then and today, and you can estimate his fortune at about $1.3 billion in today’s money. In other words, Bill Gates, Warren Buffett or Jeff Bezos could buy him out with petty cash. In the Britain of 1825, both rich and poor were much poorer than in today’s United States, but inequality was only a little greater.

The example of France in 1800 shows that inequality is not the result of right-wing governments – the government in Britain (the younger Pitt, at the end of his first term) was far more conservative and wedded to the existing order of society than the French government of 1800 (the young Napoleon Bonaparte) or the radicals of the previous decade. Instead, France’s extreme inequality was the result of French economic incompetence, and the wealth destruction which that brings.

The French middle classes had been financially wiped out as far back as 1720, by the Mississippi Scheme, which resulted in the national currency being denominated in banknotes that proved worthless. The rest of the century had seen a succession of unsuccessful wars and ever-rising taxation, which was imposed unfairly heavily on the entrepreneurial middle classes and lightly on the traditional aristocracy. Then 1789-94 had seen an orgy of destruction and looting, after which another paper currency, the assignat, dissolved into hyperinflation in 1796. The succeeding four years had seen the highly corrupt Directory in power, with yet another paper money scheme, before Napoleon took over and moved France back towards a bullion standard. Throughout the 1790s moreover, France had been at war, resulting in even higher taxes and further property destruction.

In Britain, the 1790s were not economically a successful period; with a war that was generally being lost and large budget deficits they produced significant inflation and a transition to paper money in February 1797. However, the amount of paper money was limited, since only the naturally cautious privately owned banks, led by the Bank of England, could issue it rather than the government being able to do so. For the poorer sectors of the populace, Charles Jenkinson, first Earl of Liverpool had devised in 1797 a copper coinage using the rich copper deposits of Anglesey, which as the seriously chunky “cartwheel” pennies and two-pence pieces was issued at the actual bullion value of the copper and was consequently trusted to protect holders against inflation. With the British economy, unlike the French, undergoing significant powered industrialization in the 1790s, using Boulton & Watt steam engines, wealth was much more broadly distributed than in France, and the Gini coefficient was correspondingly lower.

Today, as in the French 1790s, inequality is being increased by bad policy. Like France in the 1790s, the United States today has unrestricted paper money, which as in that society destroys savings and artificially inflates asset prices, making the rich even richer. The policy of artificially low interest rates pursued for the last decade also suppresses productivity growth, thus reducing economic vitality and increasing unemployment, again widening inequality. If you want the rich to get richer and the poor to get poorer, artificially low interest rates and central bank support of dodgy asset markets is the way to go.

Ultra-low interest rates have also discouraged saving, by producing a proliferation of spurious investment products that lure savers to their destruction. The Wall Street Journal recently had a story about leveraged Exchange-Traded Notes, based on mortgage Real Estate Investment Trusts, that lured several savers to their doom by promising yields as high as 18%, When the coronavirus crisis hit, the price of these beauties fell from $14 to 25 cents. At that point, in a refinement I had not seen before, the issuer had the right to redeem them at the market price – thus locking in a 98% loss for investors that would have become considerably less if they had only been allowed to hold on as the market recovered.

Caveat emptor, but in a world of artificially low interest rates, that phrase is not good enough; the government has made it impossible for savers to receive a reasonable yield on their savings, thus forcing them into these dopey speculations. When middle-class savings are decimated in this way, increased inequality is inevitable.

There are many other bad policies that increase inequality. Environmental regulations, for example should theoretically be neutral, but in practice remove the livelihood of low-skill blue-collar workers and raise the costs of basic necessities. An ultra-clean environment, let alone the faddish demands of global warming, are purely upper-class luxuries, elitist to the core. High immigration, likewise, puts pressure on the labor markets for low-skill individuals, and tends to immiserate them. In this context, it is notable that the immigration restrictions and deregulation of the first three Trump years had a startling effect on the low-skill labor market, especially for African-Americans, raising wages and lowering unemployment in a way that had not been seen since the low-immigration days of the late 1960s. The cheap labor lobby squawked at the immigration restrictions and clamored for more artificial contract-labor schemes such as the H1B and H2B visa programs, but in any morally reasonable universe that lobby’s clamor should be rejected with contumely.

Finally, the lockdowns imposed on the United States and other countries because of the Covid-19 epidemic may initially have been necessary, but their spurious prolongation beyond a very few weeks has hugely increased inequality, as low-wage service workers are by far the majority of those who have lost their jobs. The young poor, a high concentration of which are ethnic minorities, have suffered more severely than others from the lockdown. The outbreak of violent protests, itself worsening inequality further, is thus not surprising. In general, policies like the lockdowns that give politicians a feeling of control and power, issuing daily edicts which all must obey, damage the economy and make inequality very much worse.

France both before and after the Revolution had much worse policies than Britain (at least since the days of Henri IV). Those policies directly led to its greater inequality. The same is true today. Sounder economic and social policies would do much to reduce the inequality in American life and give low-skill workers of all ethnic backgrounds their proper share of the American Dream.